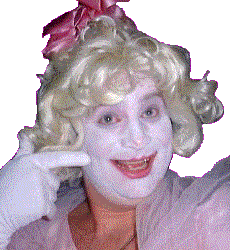 Aghast in white pancake make-up and drawn on mole, Baby Jane relives her lost stardom at your celebration. She seeks out her lost sibling and shares her tiara with her and gives her the horn they used to play with as children. Baby-Jane then notices the large audience of people at the party and asks if anyone has any requests, well of course she hears someone say “I’ve written a letter to Daddy” which she has well prepared for including her letter. Baby-Jane assures her sibling that they will some day be a “big star like her” and pronounces that she has already received a telegram for them which she reads aloud and presents to them. Finally Baby-Jane leads the entire crowd in a familiar tune to commemorate the occasion.