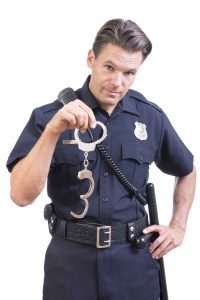 Our realistically outfitted cop arrives to arrest the perpetrator of 100 unpaid parking tickets (copies of which he has in hand). As the encounter continues it becomes obvious that there has been some misunderstanding and in actuality the Officer has arrived to present them with an outstanding citizens award. He unrolls his list of achievements that identifies personal information that we have obtained from you about the recipient. As the list goes on the Officer breaks into song expounding on the special event of the day, presenting them with a party hat and a horn to blow should they ever need to get the officer to come running. Your personal message that is written on our special telegram is read. Finally the Officer leads the crowd in a resounding familiar tune to commemorate the occasion.